While working at Reward Gateway I was majorly involved in reimagining the Reward & Recognition (R&R) suite that the company offers. It consists of a number of products that can be purchased separately and also they worked completely independently, although they are all united by the idea of recognising employees.

How to redesign a product keeping it’s selling points

I was first asked to redesign eCards – a product which enables employees to send personalised cards to their peers. Those eCards are tailored according to client specific branding and values and have a text area where the user can write a personal message with a font and colour of their choice. The company also introduced an addition to that product which added social element to it. Now the cards can be shared on a feed where the user can not only see them but also like and comment. Sounds great, huh? 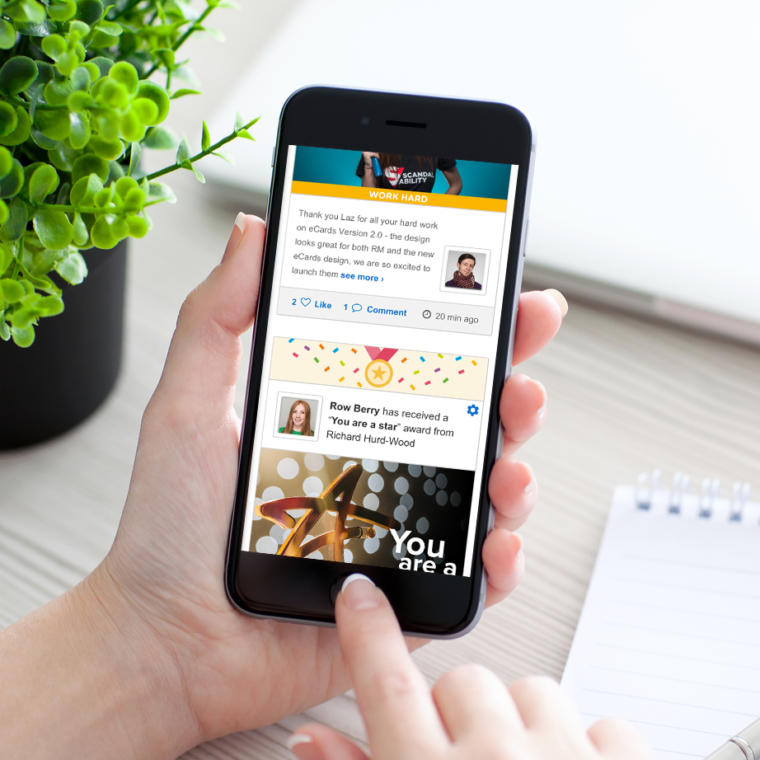 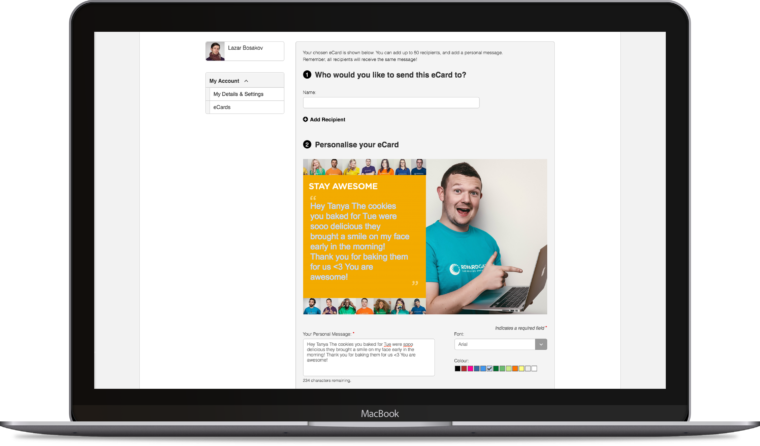 Ecards before the redesign

Because of text being fit in an area on top of the image, this might result in tiny text on mobile
Text can be on different background and the user might choose a colour that doesn’t make good contrast, resulting in difficult to read text

With the rise of mobile usage, I had to make sure ecards are optimised for viewing on small screens and that text is always crisp and easy to read. At the same time we also had to maintain features clients and users love, like the high level of personalisation.

I went through a few iterations, including a concept for flipping the card, with the idea to wow users, but wait! What about performance? So this idea was binned and after user feedback and some refinements of the UI, came to a simple and clean version, which reminds of physical post card, but being able to see both the front image and the back of the card where sits the message. With text not being limited in an area on the image, it resulted to easy to read message that can also be longer. 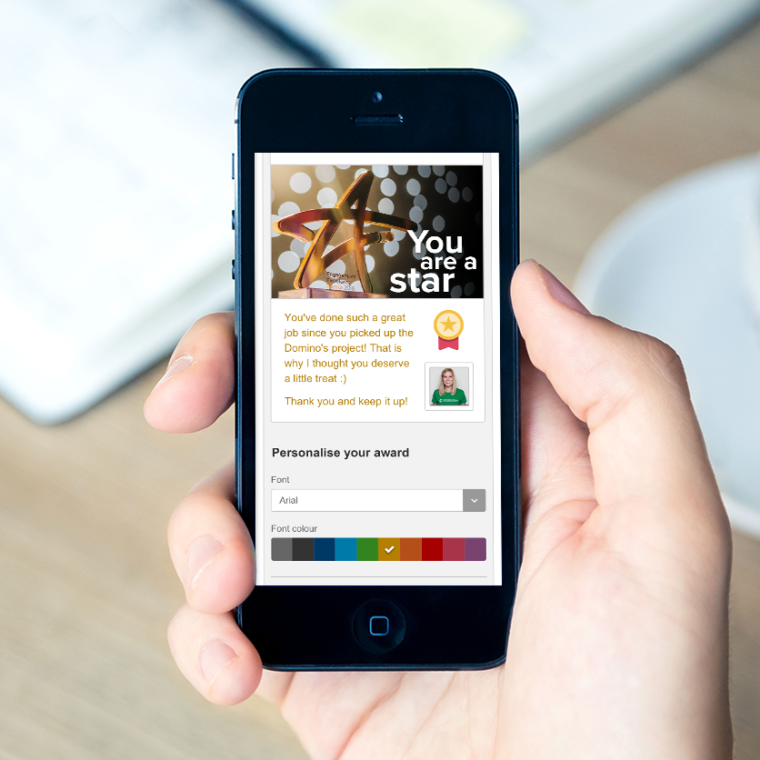 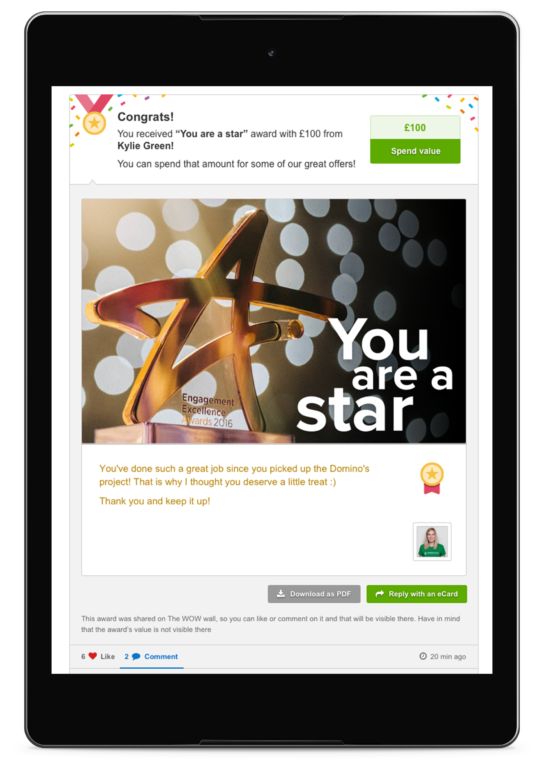 We had to leave the font colour option so I made sure it meets accessibility standards with a curated colour palette that ensures easy to read text. I also focussed on the person sending the message including an avatar. The design was successfully translated onto the ecard feed, but without the font personalisation in order to maintain consistency.
Another great side of redesigning ecards was the printable version for which I was really excited because in the end it looked very similar to a real post card, even though printed and folded in the middle. 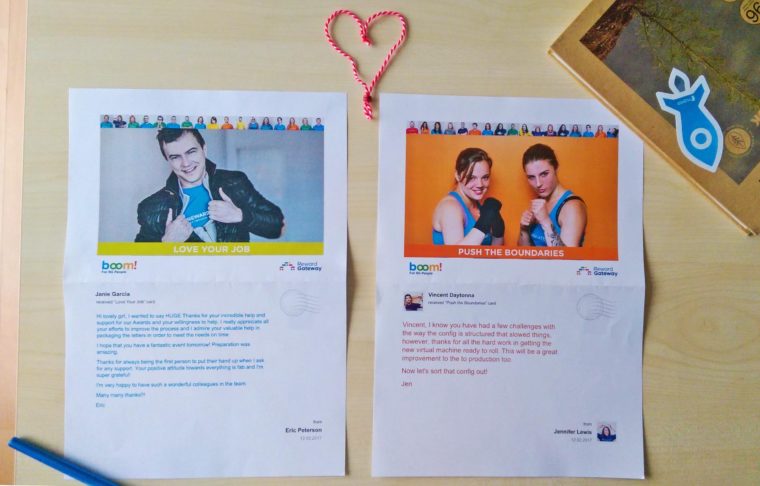 According to user testing and feedback from active users, we added the ability to quickly and easily send an ecard directly from the feed. So with the new looks of ecards and being able to easily send and preview them on any device, this resulted in an increase of product usage of existing client. Furthermore combined with a strong marketing campaign, this led to new clients starting to use either ecards or the whole SmartAwards™ product suite.

Evolution of the social recognition feed

Another great product that Reward Gateway offers, provides instant award delivery from managers to employees. It was promoted as “5 simple steps” to send an award. But how easy can be a process that has 5 steps?! And you also have to log into the admin system. So what we did was to transition that product to the feed and made sending just 1 step + confirmation, where the user could schedule the award if (s)he wishes.

In that process I had to make sure awards are also in line with the new mobile and accessibility friendly design of the ecards, but at the same time to make sure it is clear enough that those are different and that the user is aware the award actually has a monetary value to it.

That is why we conducted usability testing to check if users can distinguish ecards and awards on the feed and whether they can easily send an award from there. Results were pretty good on both desktop and mobile and we had to do only small tweaks to make it better before we proceed to development.